AMARILLO, Texas (KAMR/KCIT) – A neon-yellow background decorated with black bolded text, alongside a screenshot of a city map, has become a sort of calling card across Facebook community groups and local news comment sections in the last few weeks.

Most often posted under local updates regarding the ongoing COVID-19 pandemic, the images anchor the eye below interviews with health leaders and lead instead to a community group focused on “medical choice” in the Texas Panhandle.

With Medicare’s open enrollment ongoing until Dec. 7 and higher state and US courts arguing topics like masks in public schools, disability benefit access, and abortion, the people of the High Plains have reason to consider a broad range of healthcare choices. However, groups such as “Panhandle Texans For Medical Choice” and other community members have honed in on a single issue: COVID-19 vaccine requirements.

Late October saw multiple community member protests outside the Pantex facility. The Facebook group, meanwhile, advertised and organized a march through Downton Amarillo on Nov. 5 and scheduled their most recent event for Nov. 19.

So, why the protesting? What’s going on?

In September, the Biden administration announced a new rule that would require all private employers with 100 or more employees to require vaccines or weekly testing for all personnel regarding COVID-19, which could impact nearly 80 million workers. The deadline was set for Jan. 4, according to the rule developed by OSHA.

However, after Texas Attorney General Ken Paxton and other states sued over the mandate in October, a US Court of Appeals ordered that OSHA not enforce the requirement before “adequate judicial review.” This led to the rule, as of an OSHA announcement on Wednesday, to have its enforcement paused.

Meanwhile, aside from the OSHA rule, states have also sued regarding Centers for Medicare and Medicaid Services (CMS) requiring eligible healthcare workers in certain facilities to be vaccinated against COVID-19. The CMS mandate has a similar second-dose deadline to the OSHA rule of Jan. 4, and applies to staff that work in facilities including hospitals, ambulatory surgical centers, home health, hospice, and skilled nursing facilities.

As of Nov. 18, the CMS and federal employee vaccine requirements were still active even after the OSHA rule was paused for review.

Opinions on whether or not the vaccine requirements are lawful have shown a broad range, between bioethicists, supporters of the policies that cite the greater good as deeming them necessary, and opposition members who disagree with the principle. While each individual is bound to have a unique perspective on the situation, here is a look through previous discussions and published articles on a few general positions.

In a July article, Conservative News and Commentary Intern for the National Review Scott Wright argued that the Biden administration should reject the idea of a federalized vaccine mandate. He put forward the position that vaccination may most importantly be a personal medical decision.

Wright’s opinion was on similar ground with some local representatives. John Smithee, the District 86 representative for the state of Texas, said while it is his job to meet with constituents, he was sympathetic to the demonstrators’ cause, with the mandate being a “freedom” and “federalism” issue. He spoke with MyHighPlains.com during the Nov. 5 protest.

“I think most of us are pro-vaccine but we really have a problem with these vaccine mandates coming down from the federal government. It’s really not the federal government’s business to be telling local governments or local businesses how to operate,” Smithee said. “…A lot of these people who are having issues right now, they really don’t need the vaccine because they recently had COVID. They have a natural immunity, science tells us that.”

Important to note in light of Smithee’s comment, however, is that medical experts and local healthcare leaders have agreed that even people who have previously had COVID-19 should be vaccinated, as scientific data has shown that immunity due to a previous infection was still less effective than protection given by a vaccine.

Policy-wise, those who oppose the COVID-19 vaccine requirements have generally viewed them as Smithee and Wright do, as an issue of personal choice.

Those who support the idea of requiring COVID-19 vaccines, whether it be for schools, private businesses, healthcare workers, or federal contractors, often cite legal precedent and the idea of the personal responsibility of a person in a community to help others and support broader health and wellness.

In an article from the New Republic staff writer Matt Ford, he cited other points in US history to argue that vaccine mandates are, “as American as apple pie,” such as President George Washington’s vaccine requirement for smallpox during the American Revolution. He also cited the constitutional history of mandates.

“As with every other aspect of American life, some of this “hesitancy” has led to litigation against real or imagined vaccine mandates,” wrote Ford in his article, “Fortunately, vaccine mandates are undoubtedly constitutional. In 1902, the town of Cambridge, Massachusetts, experienced a major smallpox outbreak. Its public health board issued an order for everyone in the community to get a vaccine if they didn’t already have one or pay a $5 fine. Henning Jacobson, a Swedish immigrant who feared a bad reaction to the vaccine, refused the order for himself and his children. He sued Massachusetts, arguing that the state’s mandatory-vaccination law had violated his constitutional rights.”

“Three years later, in a 7–2 decision, the Supreme Court flatly rejected his stance. States wield what the court called the “police powers”—the basic powers of any community to regulate its own health, safety, and general welfare,” Ford continued, citing the Supreme Court’s ruling, “Mandatory vaccination, especially in an age of plagues and pandemics, fell well within these powers.”

“It’s here that we should note that mandatory vaccination doesn’t mean forcible vaccination,” Ford added later in the article, “Biden won’t be sending troops door-to-door with those tranquilizer guns from Jurassic Park to shoot vaccine-laden darts into unsuspecting civilians. What it does mean is that those who refuse to get the vaccine despite a mandate will face certain consequences for it, such as regular Covid testing or denial of entry into certain places. The private sector has even more leeway to impose consequences on workers who won’t get vaccinated: A Texas hospital system ousted more than 150 health care workers earlier this summer who had refused to get the shot.”

Citing his historical sources and the Supreme Court, Ford and many other supports of the mandates reason that measures to benefit public health are a natural part of living in civilization.

According to data from Pew Research Center in early October, most vaccine mandates in the US apply to kids and teens and impact access to school. While New York requires healthcare workings to be immunized against measles and rubella, and Rhode Island requires childcare workers to be immunized for multiple diseases and get an annual flu shot, state laws often require kids to have regular vaccinations before enrolling in school or childcare programs.

Texas, for example, requires a Hepatitis A., Hepatitis B., and Meningococcal ACWY vaccination for all K-12 students. 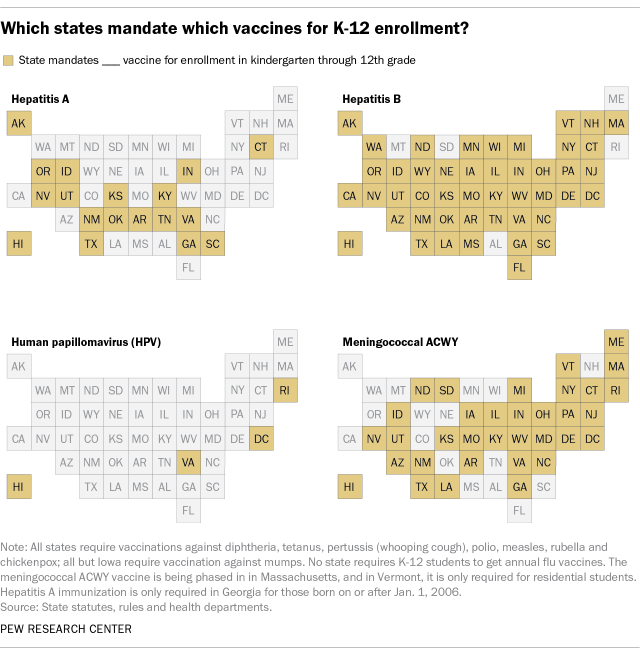 The National Academy of Sciences published Bioethicist R. Alta Charo’s perspective on the idea of vaccine mandates in summer. She covered a range of topics including vaccine distribution, vaccine hesitancy, vaccine mandates, and biotechnology.

“There is a very fundamental issue at the core of public health ethics that has to do with people voluntarily taking measures to protect others, not just themselves,” said Charo, when asked about how bioethics fits into the issue of vaccine hesitancy, “Telling people that they should stay home when they’re feeling sick, or that they should get vaccinated, is really more about their not making somebody else get sick. So public health is asking people to sacrifice their personal preferences and interests for the sake of others and sometimes telling people they have to do that; it’s kind of like an enforced altruism. So how does bioethics deal with this? It starts by acknowledging that this is about asking or requiring people to recognize that we are part of a system in which we limit some aspect of our liberties for the sake of others.”

On the topic of the ethics of requiring vaccination for employment or college attendance, Charo also went in-depth.

“I also want to distinguish between school and employment,” Charo continued on the subject, “With employment, if your viral status poses a threat to others and is inconsistent with the very essence of your position, it becomes pretty straightforward to say we’re going to require that you’ll be vaccinated. That’s where health care workers become a very special population. They are in contact with people who are vulnerable medically, and the very nature of their profession is helping people to be healthy. So putting patients at a health risk is really completely inconsistent with the very nature of the job. In those cases, in terms of the law, you’ll have the easiest job justifying why somebody could be released from employment–and that was exactly what a federal judge recently found with regard to a hospital in Texas.”

“When it comes to school,” Charo added, “I think it becomes a little bit more complicated because the risk is no longer a risk that you’re imposing on people who are all vulnerable. In addition, your position as a student or faculty member is not fundamentally about keeping other people healthy. I find it a little harder here to justify an outright prohibition on the unvaccinated, because many measures can be taken to reduce the risk of transmission, such as frequent testing, masks, perhaps isolated seating areas. Also, at many colleges there is a kind of esprit de corps, a sense of being in it collectively. For students who are activated over climate change, for example, or about abuses of people who are poor or marginalized, this is an opportunity for them to see public health in the same way. I think you can still make the argument that you have a duty to others. I have no problem with that, but I hope we’ll look for every measure short of legal requirements.”

Local healthcare leaders in Amarillo said that hospitals and facilities like the VA have been working to comply with the CMS requirements and follow CDC and FDA guidelines. Whether or not a federal policy is in place, they all continue to stress the importance of every eligible person to be vaccinated against COVID-19 and continue to practice masking and careful hygiene practices to minimize the risk of transmission.

Politics on the High Plains

The HOT Fair & Rodeo is back!

Police negotiate with shooting suspect in hotel near …

The Peddler Show Returns to Amarillo for Fall

The Barfield to receive award from Texas Downtown …

St. Andrew’s to host ‘Blessing of the Pets’

Decision to come as Civic Center trial ends after …

2 in Amarillo indicted on charges of possession of …

BCS to phase out short-term rehab at The Arbors

Report: Herschel Walker has child with woman who …

More rain chances for the rest of this week